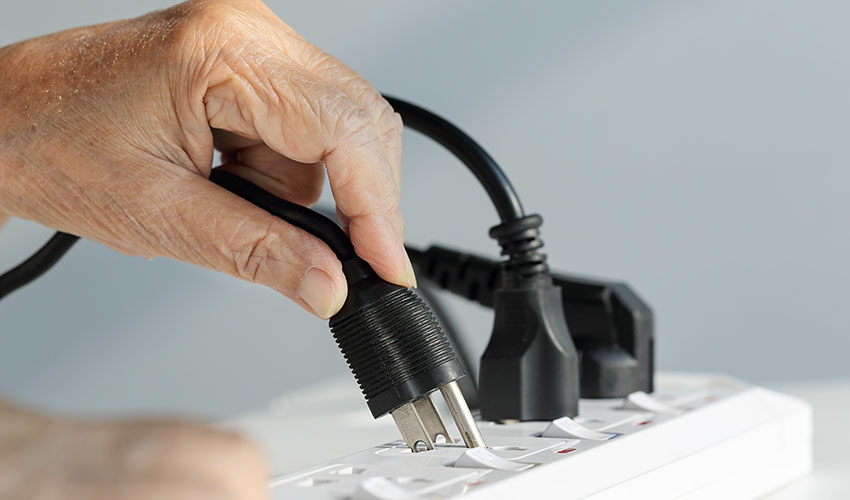 Take a look around your home. With all the appliances and electronic devices we use today, it’s almost certain that there’s a power strip in at least one outlet. Or is it a surge protector? It really should be, but did you even know there was a difference? If not, don’t worry! Understanding surge protection can be difficult, so we answered four key questions to help get you there, starting with what it’s protecting against.

What is a Power Surge?

To answer that question, it helps to understand a bit about voltage. In a power system such as your home, a difference in electric potential energy causes an electric current to travel through the circuit. It flows from higher points to lower points, and voltage is a measure of that difference.

A power surge is an increase in voltage that’s significantly above a circuit’s designated level, which is 120 volts in a typical US household, and lasts three nanoseconds or more. An increase lasting one or two nanoseconds is called a “spike.”

What Are the Causes and Effects of a Power Surge?

An interruption or boost to a system’s flow of electricity causes the voltage increase. While you might immediately picture things like lightning striking a power line or a small animal falling onto a transformer, there are many internal events that can cause a power surge. In fact, more than half of household power surges stem from inside the home.

The most common cause of internal power surges are large appliances, such as air conditioners and refrigerators. These devices require a lot of power when switching components like compressors or motors on/off, which upsets the steady voltage flow of the electrical system.

Surges can damage or ruin your electronics and appliances, leaving you with costly repairs or replacements. Obviously, these internal surges are nowhere near as intense as a lightning surge. However, they occur much more regularly (often multiple times daily) and can still damage components of your appliances, immediately or over time.

How Does a Surge Protector Work?

While a surge protector does plug into the wall and provide extra outlets, it is more than just a power strip. As the name implies, it also protects the devices plugged into those outlets from extra voltage. If a surge is detected, the surge protector diverts the extra power into the outlet’s grounding wire.

What is a Whole House Surge Suppressor?

The answer is really in the name. While your typical power strip surge protector conveniently provides extra outlets, it only protects the devices plugged into its power strip. A whole house surge suppressor is typically hardwired directly to your home’s electrical box, offering protection to all the appliances in your home. Proper installation is essential to ensure a whole house surge suppressor is grounded, so consult a professional electrician. Surge protection is important to keep your appliances, devices, home, and family safe. Stafford Home Service offers professional installation of whole home surge suppressors and other residential electrical services. Contact us to learn more or to set up an appointment today.

With RSS feeds, you don't have to visit our site everyday to keep up to date. Simply subscribe to our blog via RSS or Email and our posts will come to you!